A photo project asks: ‘Why the hell do we need clothes?’

Naked in New York: A photographer simply wondered ‘what the world would feel like naked, without the empowering or disempowering effect of clothing.’

Some social practices are so ingrained in our culture. It’s not until you take a step back, as though an alien observing Earth for the first time, that you realize how absurd and perhaps unnecessary they are. 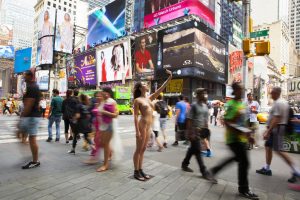 Human beings’ wearing of clothes is arguably one such thing (warmth issues aside). Does attire help us construct an identity, or prevent us from displaying a more truthful one? Does the ability to ‘disrobe’ heighten sexual desire and its inherent beauty, or does it limit the body to merely a sexual thing? Why exactly is nudity in public against the law?

Photographer Erica Simone recently put herself on the front lines of this fascinating debate with New York: Self-Portraits of a Bare Urban Citizen.

The photos from the Naked in New York project, see her doing day-to-day things like shopping, commuting, catching a cab. She buys cigarettes in a convenience store and takes a phone call in a cafe – all completely, utterly, brazenly, gloriously, rebelliously naked.

The project was “born out of an initial questioning about clothing and the importance of fashion in modern society” .

Acknowledging clothes’ function, Erica explained: “Clothes do so much more than just meet our physical needs. What we wear acts as a silent language, allowing us to convey who we are and want to be to the outside world. Fashion reveals our moods, our social standing and establishes dynamics between people. Nowhere is this more evident than on the streets of this fashion capital we call New York City.”

But she countered: “As I watched an image-obsessed society care more about the sales at Barneys than the homeless people they ignore as they parade by, I began to wonder what the world would feel like naked, without the empowering or disempowering effect of clothing.  What if all we had was our natural state to express who we are? Could we overcome our self-consciousness and become fully confident in our own skin? How would we assimilate or dissimilate? Could being naked in the world transcend sexual connotations? And why is nudity so taboo that it is against the law?”

Most passers-by seem fairly unperturbed by her nudity. Especially as the Naked in New York project was not intended for shock value.

“From there, my photographic project bloomed,” she said. “With a tripod and a dose of adrenaline, I took to the busy streets to get a taste of New York in the nude. The point is not to be naked for shock value. I am simply an artist looking to humorously explore some interesting thoughts about society. We should question who we are and embody as human beings.”

EVERY CURSE IS BROKEN
Why Domino's is Topping Debonairs in The Lagos Pizza Game
Connect with:
Facebook Google
Back to
log in
Choose A Format
Story
Formatted Text with Embeds and Visuals
Meme
Upload your own images to make custom memes
Video
Youtube, Vimeo or Vine Embeds
Audio
Soundcloud or Mixcloud Embeds
Image
Photo or GIF