With plans made and appointments confirmed (well, as confirmed as reasonably possible in Nigeria), we were all set to hit Abuja by first flight from Lagos. Time to select our preferred carrier and we decided to seek the advice of more frequent local flyers.  The rankings were almost identical across board – Air Peace was the most efficient for time, and Medview was also considered punctual and professional. Arik had the highest flight frequency but were marginally better than Aero for disappointments, delays and flight cancellations.

Time to decide, and superior judgement flies out the window. Aero and Arik have been taking to the skies for years and have never killed anyone. Death by frustration yes. But as a result of plane crashes, no. The other airlines were simply too new to be considered as safe as the old birds, especially Aero.

And so, bookings were made online for Aero first flight Tuesday 23rd August. The online platform was particularly impressive. It was hitch-free and very fast to use. What could possibly go wrong with an airline’s very first flight of the day? The answer – brand, management and reputation. That deadly combination reared its head and the first flight was cancelled.

In fact, all other Aero flights to Abuja that day were cancelled for ‘operational reasons’ whatever that means. In Aero’s case it means the company is broke and in receivership. It means Aero suffers from years of mismanagement, and has been brought down to its axles, nearing the end of its journey.

The fear now is, will she go down alone or will Aero take a few souls with it?

What exactly is the deal with Arik?

But back to the experience. With Aero flights cancelled, we make our way to the old local airport where we had been advised that there were still a few seats left on an 8am flight. On Arik! The morning was going from bad to very bad. For those who haven’t been to the old airport in a while, the sight of Arik’s terminal  in full swing is something to behold. It’s like a market place. Arik has more flights, more passengers, and possibly more planes than all the other airlines put together.

How can this company be in receivership? How can Arik Air be broke? They literally rule the Nigerian skies. But there are tell-tale signs as to why the airline is in financial difficulty. Customer service is virtually non-existent. There is poor coordination between ticketing and operations, with one team openly insulting the other in front of customers. Actually, I suspect Arik has successfully separated ‘customers’ from ‘passengers’, preferring to treat everyone as the latter. Cattle in this case.

But today, they outdo themselves and leave on time. As expected, the flight itself is smooth, it’s quick, and once again you are reminded of the fact that when it comes to flying local in Nigeria, what matters most is safety.

Come the next day, business sorted and it’s time to head back. We’ve overstayed thanks to logistics issues – Abuja is a beautiful and tranquil place by the way – and we have to scramble for seats on any available flight. This time we’re stuck with Medview. And Dana.

Fly Dana? Over our dead bodies

Now there’s a theory that Dana Air is the safest airline in Nigeria today having lost a plane and killing many innocent Nigerians a few years ago. And anyway, lightning doesn’t strike twice in the same place. Or does it? Well of course it does! And having known several people on the ill-fated plane, we were not about to  test an outdated lightning myth. So, off to Medview it was. But first, and in fairness to Aero Contractors, our botched flight tickets were fully refunded at the Abuja airport and in good time too.

It turns out Medview is one of  2 local carriers which cover international routes. The other being Arik Air. What this means therefore, is that Medview must be held to the highest possible international safety standards, well beyond what the good people at FAAN would ask for. Where has Medview being all our lives?

And what do you know? As you climb aboard the plane, there’s a certificate of airworthiness right by the door displayed at eye level for all to see. And I did have a thorough look-see. It read May 2016 as the last successful check up date. And it’s August. This by itself is a major selling point and it is a wonder more airlines don’t use it in their marketing. What could be more reassuring than a certificate of airworthiness on a Nigerian plane?

The plane itself appeared new and clean, and the staff on board were professional in conduct. There were 2 attractive waitresses on board, with the most attractive one serving the business class passengers. It seems once again that beauty goes to highest payers. At least on Medview. But I digress.

Everything is going very well until we settle into our seats whence we are confronted by true horror. An advertising horror the likes of which may not have been seen since the 70s.

How not to advertise Messrs First Bank Plc.

The adjoining pictures speak a few thousand words. What were they thinking? Seems the advertising playbook at First Bank dates back to 1894 when they started banking operations.

I have another theory: there is a clear correlation between the creativity or lack thereof of a company’s marketing team and its financial fortunes. Ok so this isn’t terribly original but the point is the same. 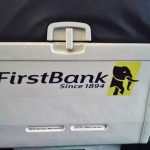 It is hard to imagine a GTBank or even Sterling Bank pasting tacky posters like this in an airplane.

Maybe Skye Bank, but certainly not the other forward looking higher flying banks.

But once again, it’s a smooth flight. Better even than the outward bound journey.

Nothing med, medium or mediocre at 1st class Medview

The final verdict is pretty straightforward – Medview is first choice. Given the experience of our counterparts who travelled earlier to Abuja, Air Peace remains faultless for sticking to time. And they still haven’t fallen out of the sky. So it’s a conciliatory second place to the oddly named airline.

Arik comes in third, they’re not once again delayed. You want Arik to succeed. You’re willing them on because so much money has been put into the business. We are desperate for a Nigerian success story and they look the likeliest to deliver.

But a radical shake up is sorely needed at Arik. The staff need re-orientation, or frankly a complete cleanout.

As for Aero, the end is nigh. And a real and present danger comes with the sinking fortunes at Aero. Their last flight whenever that is, may spell disaster for those unfortunate enough to fly with them.

Must be something about these airy names – Aero, HiTV, Skye…